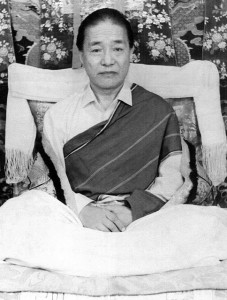 The great Ngakpa Lama Dudjom Rinpoche is pictured here in his Ngakpa Robes – the ordained non-monastic clergy of Tibetan Buddhism. The long hair, white skirt and the red and white shawl show the common form of Ngakpa Robes. Dudjom Rinpoche was one of the greatest Nyingma masters in history and teacher to many of the most significant Lamas alive today. This weekend is Dudjom Rinpoche’s anniversary.

Dudjom Rinpoche or Dudjom Jikdral Yeshe Dorje (Tib. བདུད་འཇོམས་འཇིགས་བྲལ་ཡེ་ཤེས་རྡོ་རྗེ་, Wyl. bdud ‘joms ‘jigs bral ye shes rdo rje) is the title of a prominent line of tulkus of the Nyingmapa order of Tibetan Buddhism. Dudjom Rinpoche was born in 1904 on the tenth day of the sixth month in the year of the wood dragon in Southern Tibet in a region called the “hidden land” (Tibetan: beyul) of Pemako. He died on January 17, 1987 at his residence in Dordogne, France. He was the head of theNyingma school in exile. From:  http://en.wikipedia.org/wiki/Jigdral_Yeshe_Dorje_(2nd_Dudjom_Rinpoche)

With Pema Khandro and Chagdud Khadro

The Bardo Teachings with Pema Khandro

With Pema Khandro and Shugen Roshi