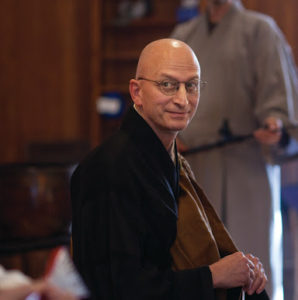 Geoffrey Shugen Arnold, Roshi is the Head of the Mountains and Rivers Order, abbot and resident teacher of Zen Mountain Monastery, and abbot of the Zen Center of New York City. He first encountered the Dharma and began his meditation practice in 1975. After studying undergraduate mathematics and receiving a degree in classical music (performance and composition), Shugen Roshi began studying with his primary teacher, John Daido Loori Roshi in 1984. He entered full-time monastic training in 1986 and was fully ordained in 1988. He received dharma transmission from John Daido Loori, Roshi in 1997 and continued his studies and practice at ZMM. After spending ten years as the resident teacher at the Zen Center of NYC in Brooklyn, NY (2004-2014), he returned to Zen Mountain Monastery in 2015 where he lives and teaches full time. His teachings on Zen, social justice and environmental stewardship have appeared in various Buddhist journals, and The Best Buddhist Writing 2009 (Shambhala Publications). His book of poetry, “O, Beautiful End,” a collection of Zen memorial poems, was published in 2012.